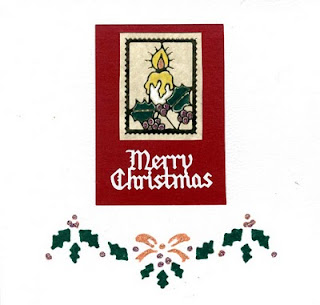 In response to this week's Bah! Humbug challenge.
Its a simple card using a brass stencil for the banner and a mounted peel off coloured with Sakura and Staedler pens. Hope you like!
Posted by Carolyn at 22:24 2 comments:

Email ThisBlogThis!Share to TwitterShare to FacebookShare to Pinterest
Labels: Bah Humbug, cards and crafts, View All 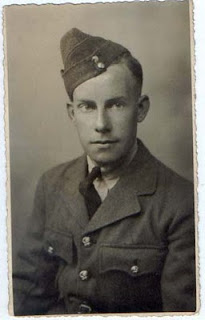 My Dad (William Pears) was born 24 August 1922 at Misson Springs, son of James Jesse Pears and Mary nee Mellors. He had three half siblings, Dorothy, Gladys and Cyril Mellors who never knew their own father(s). JJ and Mary married in 1919. They were aged about 50 and 37 respectively. Two more children were born in marriage, they were James Jesse born 1919 and Reginald born about 1924. The two bedroom cottage he lived in was one of a terrace of three. Water was provided from a well which regularly had to be cleared of dead rodents. Dad suffered from polio as a child and was nursed by his elder half sister Gladys Mellors. The cottage had a long garden in which vegetables and fruit were grown for home consumption and bartering with neighbours. The garden was so long as to need horses and plough to dig it. Dad remembered them using a horse that only had one lung and also being bitten on the thumb by one. The battle scar stayed with him all his life.

Granddad JJ Pears was a farm foreman at that time having worked as a farm labourer for most of his life but had also worked as a Sinker at New Rossington Pit in the early 1900s. Granny Pears supplemented their income by working as a ‘gentleman’s cook’ and was often called to prepare and cook meals at big houses. Left over jugged hare and the like was a welcome supper in the Pears’ household.

Dad went to school at Misson. Schoolchildren from the surrounding area travelled to school on a converted coal wagon driven by a Mr Hedley. The school comprised three classrooms, one each for the infants, juniors and seniors. The Headmaster was a Mr Brell and the Mistresses were Miss Jones and Miss Bradley. Dad thought himself to be quite clever despite only going (as he put it) to a little school. Before school, Dad had his chores to do and these included chopping wood, collecting eggs for a neighbouring farmer and bringing back milk from the farm. His breakfast was very often melted cheese from the oven, spread on chunks of toasted home made bread.
Dad also remembered going to Doncaster on Saturdays with his mother to help with shopping, going to chapel at Misson and agricultural shows at Haxey. His pets included dogs, rabbits, ducks and chickens. I expect all except the dogs were meant for the table eventually!

He had a spirit of adventure and loved to tell stories from his youth. Visiting the game keeper’s bush to see vermin hanging, hunting rabbits, playing along the river Idle, looking for eels and snakes and hiding from the water bailiff with his brothers and friends Fisher, Grant and Jackson. His younger brother Reg fell through the ice on the river and Dad, even though he couldn’t swim, had to pull him out. Dad eventually learned to swim in the Mediterranean during WW11 while serving with the RAF.

In 1938, Granddad started work for Coopers (farmers) and the family moved to a tied dwelling at Park in Westwoodside. An old grey stone house with stone flag flooring, no electricity and an outdoor earthen toilet. There was a coal fired range in the kitchen, the house was lit by paraffin lamps and water was supplied from a tap in an outside wash house. There was no garden as such to grow vegetables but Granddad JJ Pears kept pigs at the rear of the house and chickens at the front. Granny would hang sides of bacon and cure hams in the cellar and her homemade pork pies were in great demand!

Dad said they were surrounded by family at Westwoodside and often spoke of his Aunt Butler who seemed to be held in high regard and so time went on…children grow up and leave home and so it was with Jesse and Mary Pears. Despite living in such poor and hard conditions compared to what we know today there was a quality of life that remains priceless. I had a short glimpse of it when I was a young child. Visits to Westwoodside are now happy memories. Granny, tall and thin with grey hair tied up in plaits, who made the most delicious afternoon teas of home cured hams, pickles, jellies and cakes. Granddad who was a bit scary with his deep graveling voice and huge moustache but most of all, I remember the love that I felt in Westwoodside. Something I will always treasure.