I love the multi layered cards that some people make and the swirls and embellishments that seem to go on forever. One day I will try my hand at such masterpieces but for now I'm just glad I was able to motivate myself into creating some pressed flower designs and transformed them into 'any occasion' cards or note-lets. 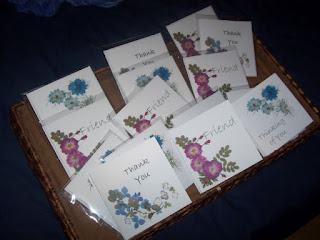 An American friend of mine sent me some lovely pressed flowers when I was ill and I was thrilled to eventually get to use them over the last few days and create something special. Amongst the assortment Barbara sent me were Roses, Hydrangeas and Love in a Mist. I made very simple designs with them adding a few pieces of my own pressed items too. They scanned well and I played with the images adding text and created some 5 x 5 inch cards with them. They are very simple cards with no message inside but sometimes I think just one word coupled with a pretty image is enough and can speak volumes. 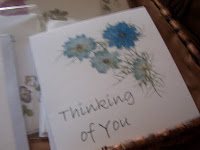 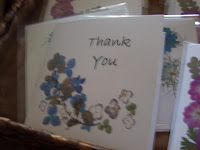 This is the first run of these particular cards and although they are perfectly OK as they are I have to admit (I am my own worst critic), that they could have printed better. The next run will be using a superior card and hopefully one that my printer likes! I'm sorry the close up images shown here are a bit out of focus but that's because my hands aren't too steady. I should have a little tripod somewhere, errrmmmmm, where's that gone! 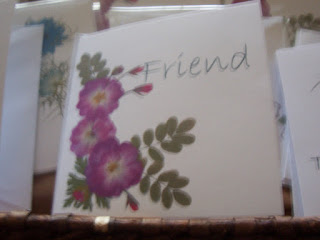 I said they were something special and so they are! I recently joined an organisation called  Cancer Connections, whose headquarters are in a bungalow in a neighbouring town and I was delighted to find two boxes in the lounge - one for men and one for women. The boxes are for giving and taking out little surprise gifts for members. Just something to cheer up their day. I thought how much I would like to give something in support of this wonderful charity and decided to donate some special cards. Nothing elaborate or fancy, just something small and simple that might be appreciated. I hope they will be well received.
Posted by Carolyn at 19:56 No comments: 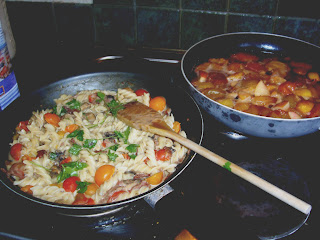 With just a small part of my stomach left and a need to avoid gluten and lactose its not always easy to find something to eat that is both appealing and fits the bill. I always had a good appetite and enjoyed most foods and taste experiences. My grandson is also gluten and lactose sensitive and I now realise the need to become more creative with food and make nutritious meals that the whole family will enjoy.

Today I made a loose take on Pasta Carbonara. Instead of cream I used soya milk, thickening the sauce with cornflour and lactose free cheese and completely forgot to add egg! The cheese was quite strong so I didn't need much - just a couple of tablespoons of grated cheese was enough. I cooked gluten free pasta until it was cooked through but still firm, drained it and poured boiling water over it to refresh.

I hate waste so I used the single rasher of bacon that had been left idling in the fridge for days and a slice of cooked ham from another opened packet. Chopped them both up into small pieces and fried them in olive spread, adding chopped mushroom and a good mix of home grown yellow cherry tomatoes and red baby plum tomatoes. I like a coating sauce best so I added enough soya milk to amply wet all the fried ingredients without letting them swim, then thickened with a heaped teaspoon of cornflour mixed previously with a drop of milk to make a creamy paste. Just as you would do when making custard before instant custard became the norm. Brought the mixture to the boil and allowed to simmer for a minute or so, stirring all the while.

I added some torn coriander leaf at the end of cooking time, mainly to add a bit of colour but in hindsight, for extra flavour I wish I had added either a touch of garlic or some green pesto during the cooking process. I was able to divide it up into four small portions for myself but otherwise it would make two regular size portions or one large portion for those with big appetites.

My husband tasted it and said that it reminded him of something he'd had abroad and yes he would have some if I made it as a family meal. So I took that as a compliment!

While all this was going on I had a wok full of plums from the garden simmering in water, demerara and white sugar, ground ginger and cinnamon. The smell was divine! I let the liquid reduce to a syrup consistency and when it has cooled will pack it into zipped storage bags for freezing. It will come in very useful for making cobbler or crumble desserts in the future, though I have yet to master the technique of using gluten free flour! 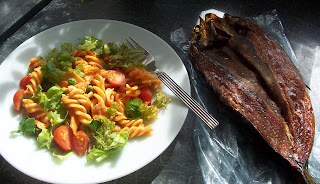 Well, my blog went by the wayside for the last couple of months due to me having my operation brought forward and my recovery since. I'm really glad that's over with and I just have to concentrate on getting better and hope the sarcoma doesn't return.

Staying on that positive note I want to tell you about my trip out yesterday and yummy purchases. We chose a lovely day for a drive into Northumberland sightseeing the coast and castles up there. It was almost like being on holiday and my first proper day out in months. The scenery was beautiful but I could have kicked myself for forgetting to take my camera, oh noooooo! Never mind we intend going back for a revisit, especially to Warkworth, which is fabulous and has superb river walks and steeped in heritage. The trees and vegetation were still lush and green but I also look forward to visiting in autumn when seasonal colours should be radiant. I will remember to take my camera with me next time.

My other half was keen on getting some Craster kippers to take home so we drove to the little fishing village and had a pleasant walk by the harbour and visited the smoke house shop where traditionally smoked fish can be bought. I treated myself to some hot smoked salmon and wondered later why it had cost so much till John pointed  out that it had been £29 per kilo!!! Agghhhh!! I made up my mind there and then to make sure I enjoyed it. So last night I cooked some pasta in tomato sauce and tossed in some of the very expensive hot smoked salmon, a few peas, coriander leaf and home grown lettuce and baby plum tomatoes...delicious!

Before we went home we visited some tea rooms in Alnmouth and had some very nice coffee and cake.  John had carrot cake by the Cake Root company and I had a gluten free chocolate cookie which I have to say was the most decadent I have ever tasted. The coffee wasn't bad either.

I'm so looking forward to my next trip.