More wreaths. My OH brought me a whole bunch of twigs... a bundle of them from Poundland. You will never guess how much they cost! 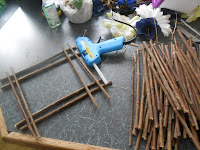 With help from grandaughter Amber and a glue gun, twigs, raffia and silk flowers plus decorated wooden hearts we had a Blue Peter Session. 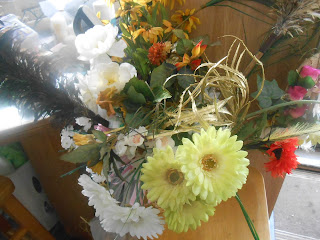 They were quite fiddly until I got the
hang of it but I'm inspired and hope to make some more. 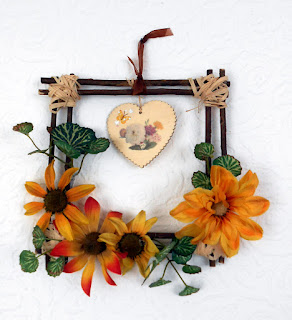 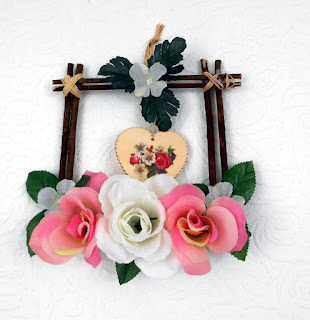 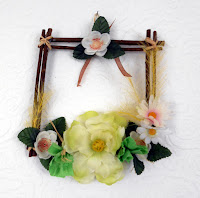 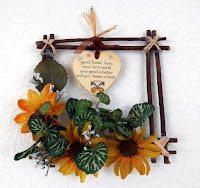 The first reader to guess correctly how much the twigs cost from Poundland will get a twiggy wreath of their choice... only joking! he he
Posted by Carolyn at 23:05 No comments:

Email ThisBlogThis!Share to TwitterShare to FacebookShare to Pinterest
Labels: cards and crafts

I had long looked forward to this day. Visiting St Paul's church at Jarrow was the first little pilgrims walk for our church group 'Blessed is She'. 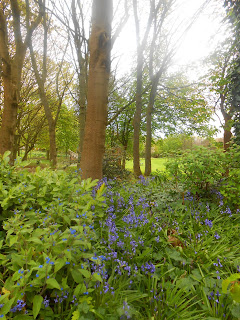 The sky was overcast and a little cool with occasional brighter moments to remind us that summer was near. Though spring daffodils were dying, Bluebells and blue Borage were plentiful. There was plenty of bird song and we saw evidence of woodpeckers in the trunks of trees. 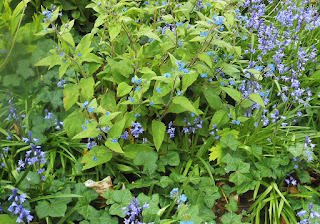 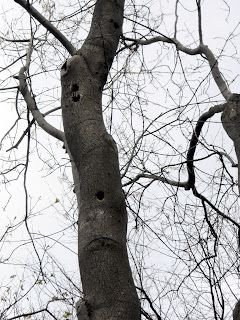 St Pauls church and monastery in Jarrow was originally a Saxon church and dates from  685 AD built on land given by King Ecgfrith of Northumbria. Later, around the 8th century it fell to the turmoil and brutality of Viking raids. In AD 1074 the Monastery was re-founded by Aldwin, Prior of Winchcombe Abbey in Gloucestershire and subsequently became a daughter house of the Benedictine Community of Durham.
Five hundred years later it became a victim of the dissolution of the Monasteries under King Henry VIII, since when it has remained in use as the Anglican parish church of Jarrow. Ruins of the Monastery still stand, steadfast but graceful, in the church grounds. 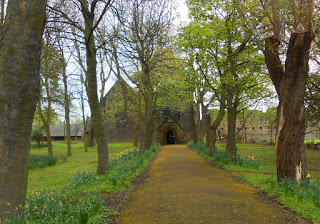 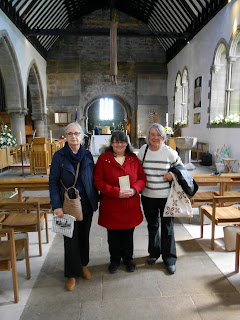 TheVenerable St Bede is credited with writing the Ecclesiastical History of the English People an author and scholar and lived at St Paul's monastery for most of his life and it was to be in his footsteps, members of BIS were to explore and follow on their visit to St. Paul's church at Jarrow.

Syd Harrison and Ray Beck, volunteers at
St. Paul's looked after us during our visit and
shared  with us a wealth of knowledge. 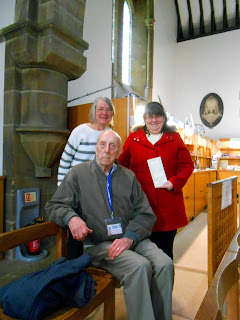 We were able to see the original Saxon foundations and many artefacts including stone and wood carvings reflecting the history of the church and monastic site and St Bede. We also lit a candle in prayer for members of our group and also for Fr David. 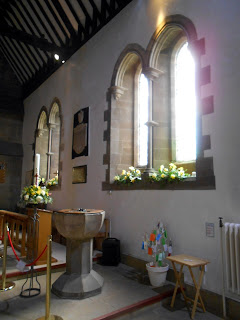 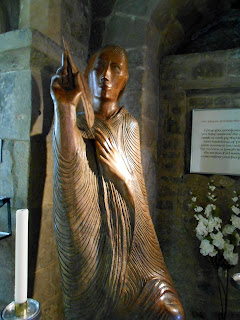 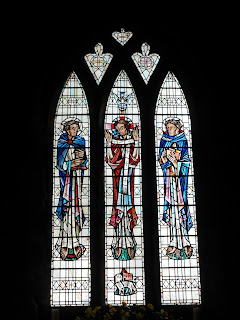 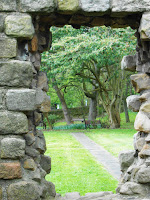 We were reflective of the ground and ruins being the home of St Bede and walking in the very same spot as he did over a thousand years ago. 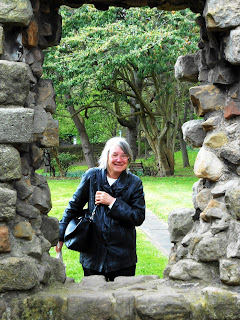 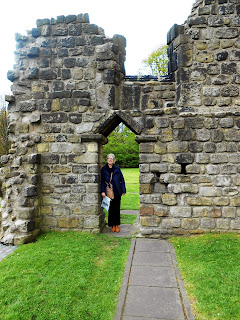 We followed the river Don which skirted around and behind the church and monastic site, much smaller now than what it was in the time of St Bede. Probably due to the silting of the river Tyne. 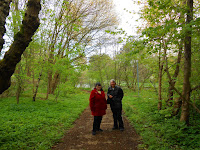 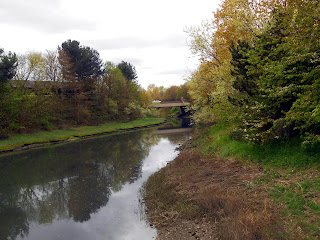 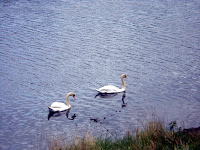 Swans came to say hello but
unfortunately we had nothing to feed them with but it was nice to see them anyway.

We continued our walk through Charlie's park under a mantle of cherry blossom and saw children playing on the Viking ship in the adventure playground, enjoying each others company and we marvelled at nature and the joy that is God given.

Finally we called into the café at Jarrow Hall for welcome refreshments and rest.

We all agreed we had a very good pilgrim's walk and are looking forward to our next one.

Palm Sunday had the promise of a beautiful Spring morning bathed in
sun freckles, cherry blossom and
newly born leaves under a canopy
of clear blue sky...


Just what I needed!

I went to early morning mass and
collected my palm crosses. One for
me and one for each of my children.
I remember reading or hearing
somewhere that displaying the
palm cross at home throughout
the year will bring peace.

Well I can't say that's definite from my own experience but then I don't
know how life would be without a palm cross on display.
I'm not going to shelve my blessings by not showing one, that's for sure.

As the sun climbed higher in the sky it got warmer, too warm for April really but welcome all the same. The diced lamb was cooked so I switched off the slow cooker and decided it was too nice a day to be stuck in doors cooking Sunday lunch so John and I went out for the afternoon to Seaham and joined throngs of people of all nationalities and accents, all doing the same. I would imagine very much like the first Palm Sunday.
The giant car boot sale spread out across fields and why we should spend an afternoon looking at mostly other people's junk I will never know but we weren't the only ones. I did manage to get some very nice silk flowers and John got two new pairs of casual trousers, the kind he likes and for whatever reason, can only find for sale at markets!

By mid afternoon it was hot and the sun was still blazing down. The one and only ice cream van had a vast queue and I wasn't prepared to take my turn in it so we got hotdogs instead. Mine without a bread role but with onions. I thought it tasted awful but John scoffed his with lashings of mustard.

A ramble in the fresh air and sunshine
did us the world of good and when I
got home and after lunch I was
motivated to make some spring/
summer wreaths using my newly
acquired silk flowers and
butterflies that belonged to a recently deceased Philippine lady
who was well loved in our parish. I gave one of the wreaths to her carer and she was so grateful, bless her.
It will be a lovely memory of Joanna.

My mother was on my mind for much
of the day too. It would have been her birthday and I like to think that in her corner of heaven she shared making wreaths with me.


By the way. The lamb was beautiful, it was so tender and juicy, mmmmm, must make it like that again sometime.