Its been ages and ages since I wrote a blog post. That's probably down to me getting the diagnosis everyone dreads. My grandson was diagnosed with cancer shortly before I was but he had his operation not long afterwards and so far he is recovering well. I am on treatment to shrink my tumour and it may be early 2013 before I get my operation. Its a long and depressing wait. I hate it, I hate it with a passion. Its a parasitic squatter and has no right to make its home in me. Can't wait to get it evicted. That rant over, lets get down to craft and creativity.

I was lucky to get two orders last week. They came out of the blue and an offer of stand space to fill with my cards in a local party shop. I had some note cards in my stash so I bundled three at a time and wrapped them in raffia ribbon with a little tag. I had some singles left over too and they all went onto my new stand. I'm delighted to say the least and I'm planning on making lots more cards to fill up the stand.

The two orders I got were for a new pet grooming business being launched and a pearl wedding invitation. I felt a bit rusty but gave it a go and came up with these. 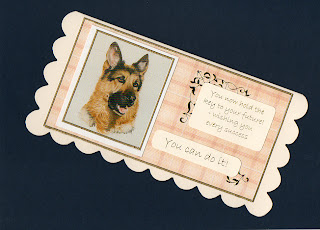 I used a scalloped card blank and added freebie backing paper edged with line peel offs, A doggy image I've had for so long I can't remember where I got it from and added line peel offs to the inside border. I think that worked quite effectively ! The sentiments are Anita's die cut messages and tags from The Range and I finished off with some peel off scrolls. I included an insert with an apt message but can't remember what it was now...oh dear! 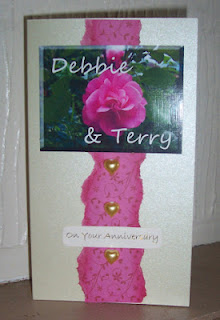 This one was for a pearl wedding anniversary. I knew nothing about the couple other than their names. I just hope they like the card.
I made an A5 blank card out of Stardream from Joanna Sheen and trimmed the front by about 5 cms so that the pattern on the inside of the card could be seen and to make it just a little bit different.

The image is a photo I took in my own garden and cropped to show a perfect rose. I personalised it digitally and gave it an embossed frame. I think this works well as there is no need for matting....saving on card there! The ribbon effect which is down the centre of the card is freebie backing paper which I tore to make a strip. The tear showed its white core edge but I didn't like it so coloured the edges with pastel and I think it works better. I finished the front off with pearl hearts and a sentiment.

This is the inside of the card. I printed off a much lighter and magnified version of the rose image and typed in a verse from i-magination. Trimmed it to fit the same width as the card front and added a strip of the same backing paper as on the front of the card and a border of gold hearts on an ivory background. I then finished off with a big thirty peel off. 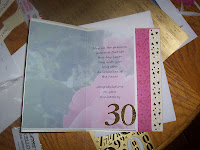 I left them at the shop for my customer to pick up so haven't had feedback directly but I'm told my customer was pleased. I'm going to get my tea now as all this blogging has made me hungry :)