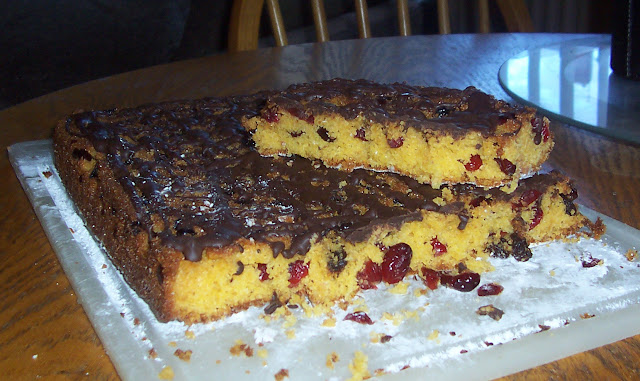 A while back I tried cooking with ready made polenta and it was hugely disappointing. However! I don't give in that easily so when I found a recipe for polenta cake in Phil Vickery's Gluten Free Cooking for Kids I took the challenge and decided to have a go.

I had bought some ground polenta as opposed to the ready made and set to finding the rest of the ingredients in my store cupboard. Of course I didn't have everything...do I ever? That made no difference, I decided to adapt the recipe according to the ingredients I had and hoped for the best.


The first traybake I made  was my contribution to my daughter's fireworks party. I used dried ready to eat apricots and marmalade with ginger instead of the frozen peaches and lemon zest as listed in Phil's recipe. I also substituted demerara suger for the recipe's golden castor sugar and Willow spread instead of butter. The resulting baked cake was sweet and moist with an interesting rough texture that everyone liked.

My granddaughter Natalie had an upset tummy so couldn't have any of the cake and poor mite must have dreamt about it all night long because that's what she wanted for breakfast the next morning. Of course there was none left and the tears flowed. I said I would make another one and this time I decided to use the correct sugar and butter as listed in the recipe. A quick trip to our local Asda got some castor sugar and butter but there was no frozen peaches or similar to be had. The dried apricots were a ridiculous price so I decided to buy dried cranberries and mix them with raisins from my store cupboard at home. I also bought some silver shred marmalade and although I only needed a dessert spoon full the rest will come in very handy for spreading on toast at supper time.

I'm so disorganised! I couldn't be bothered to use an electric whisk as it was packed away with its attachments in a box at the back of a cupboard somewhere so used a fair bit of elbow grease instead and eventually the cake mix creamed together. I got a lot more cranberries and raisins to the pound than I did apricots and ended up with a very fruity cake mix. This was where I started to panic. Would it end up in disaster? 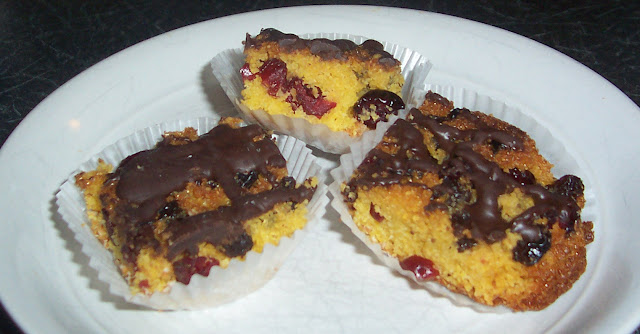 The cake mix rose in the oven but left most of the fruit behind so when it had cooled I treated it as an upside down pudding, turning it over so that the layer of fruit sat on top of the traybake cake. Luckily I had lined the tray with baking paper otherwise I may have been scraping fruit off the tray and then the cake would have been ruined. I gently peeled back the baking paper to see a butter glistening jewel like layer of juicy fruit. Oh yes! This cake is to die for! The cake texture was different, more like a buttery Madeira. I thought all that sweet stickiness would marry well with a touch of bitter dark chocolate so melted some and dribbled it over the fruit layer. Yum Yum Well Done!

Warning! The calorific value of this cake doesn't bear mentioning.