The old mojo seems to have gone to sleep again. I really had to kick it hard to come up with some creativity this week. I was stuck between projects and didn't know where one finished off and the other began! So I was reluctant to start anything else.

I hate waiting around...waiting for something to happen and yesterday was just that. Husband was waiting for the acute nurses to visit and check him out and I was getting bored. Thumbing through recipe books and looking at pretty pictures gave me the urge to bake. Chocolate and peanut butter squares sounded good and I had all the necessary ingredients, so quick as a flash, the decision was made and I started to bake.

Before too long the house was full of nurses and surprise family visitors all arriving at the same time. I had plenty of helpers and who said 'too many cooks spoil the broth'? In this case helping hands certainly enhanced my efforts at making chocolate and peanut butter squares and the kitchen became a hive of activity while husband John was in the sitting room being looked after by amazing NHS nurses.

The cake mix was done and Joanne poured it out into a baking tray leaving enough in the bowl for a good finger licking session afterwards and Alex broke up chocolate buttons to sprinkle over the top. The finished cake was so good. Definitely one to make again and it will go into Nana's favourite recipes book. 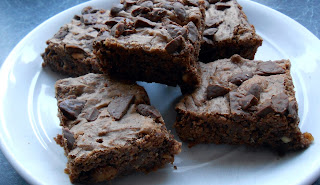 That was yesterday and today I thought why not try a recipe using gluten free oats. I had bought the oats at a gluten free fair last weekend and hadn't baked with oats before. I searched for a recipe on-line and found one for thick and chewy oatmeal chocolate chip cookies at glutenfreeonashoestring.com . Its a great site and I visit quite often. The only changes I made to the recipe was to use mixed fruit instead of chocolate and I have to admit to being puzzled as to what the american term Baking Soda was. I could choose between British baking powder and bicarbonate of soda but which one? I finally used baking powder and hoped it would work. I also used less sugar and slightly more egg.

The recipe was very easy to make and though I must have made the cookies bigger than they should have been (I made 18 as opposed to the 24 stated in the recipe) they turned out well and I think just one would make quite a filling and healthy breakfast. They taste very yummy too, crisp on the outside and chewy inside. 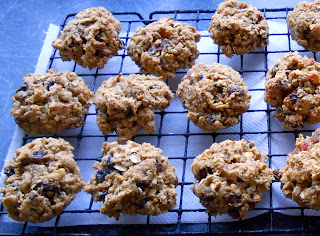 I wonder how long these will last when shared out with family. I'm off to watch Master Chef now.