Ampleforth Abbey in North Yorkshire is set in breathtaking scenery. My recent visit with a party from my parish church coincided with the worst snow of the winter so far but it didn't deter us and we had an amazing weekend staying at the Grange in the Abbey grounds.

The buildings are as impressive as the landscape and I enjoyed exploring parts of the grounds and taking photographs, some of which are shown below. 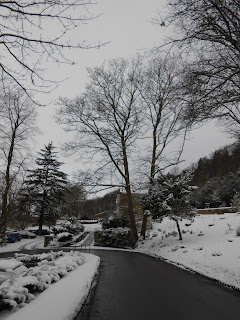 The driveway from the main road into Ampleforth Abbey grounds. The Grange is centre background. It was very warm and clean comprising bedrooms, refectory, a chapel and a room for socialising and talks and a lounge and library on the top floor. We were very comfortable there. 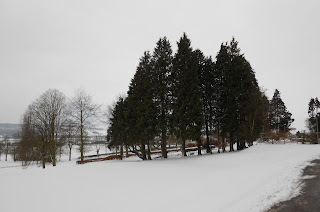 This group of trees stood together in majestic dialogue in the snowy grounds. 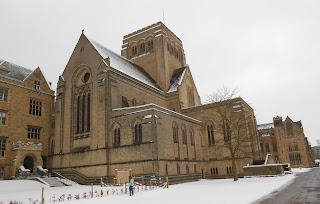 The Abbey of the monastic community of St Benedict. The community also has a resident college for boys and girls and an apple orchard in site producing such drinks as apple brandy and liqueur. Monks from here serve eleven parishes in England and have also established a monastery in Zimbabwe. 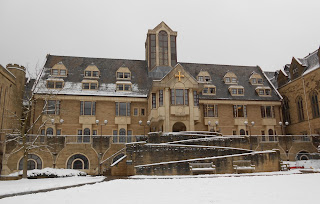 The rear of the Abbey buildings shown here look out at stunning views across North Yorkshire. 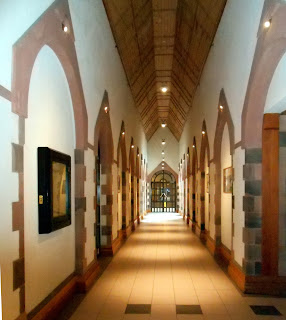 The Abbey is as beautiful and impressive inside as it is out. This is the corridor to the Abbey church entrances. 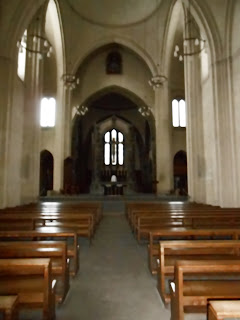 Inside the Abbey is far bigger than this photo shows. It is actually huge and the ambiance amazing. On Sunday we joined the students for morning mass and the abbey was filled to capacity. They were all so well behaved and attentive to mass they were a credit to their teachers.

The monks and staff were very welcoming and looked after us well. Food was plentiful and they were kind enough to make some gluten free dishes. Even snacks of gluten free shortcake and scones served separately on doily decorated plates. It felt like they were made especially for me!

Chicken curry with a choice of rice or potatoes and broccoli 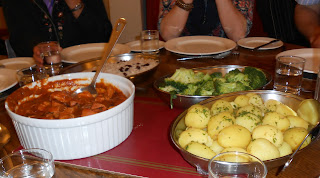 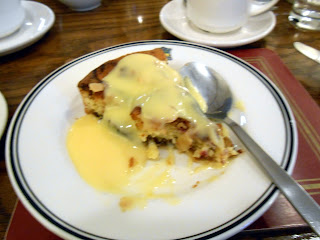 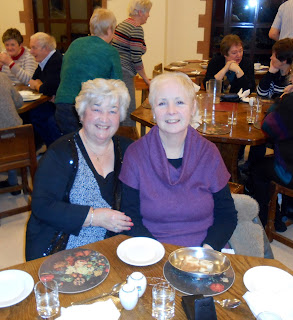 Doreen and me in the lower guest refectory having lunch. 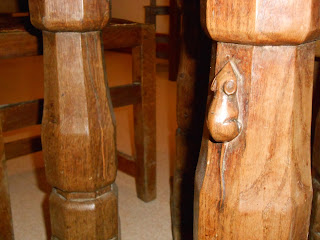 A lot of the oak furniture in the Abbey was created by Robert (Mouseman) Thompson who lived in Kilburn in North Yorkshire. I found this mouse under our dining table. 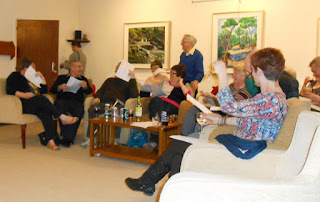 We socialised on Saturday night in the Grange. The bar was open and we sang Geordie and Irish songs.

The following day we said our farewells to Ampleforth. It had been for me a spiritual journey and experience I'm not likely to forget. I think many others felt the same way.

From Matins at 6 am with hooded monks in the dimly lit Abbey to coming together in prayer with one of the monks, Father Matthew, in the Grange and a full itinerary of devotions in between, felt at times a little exhausting and almost like a boot camp. But one well worth taking part in! Father Matthew finished off by giving us a prayerful talk on Sunday before we left for home. He had been very good and attentive to us during our stay.

Despite the snow the roads were clear and we made good time getting home by coach...taking our lovely memories home with us.

I'm already thinking about going to Medjugore in September!
Posted by Carolyn at 17:07